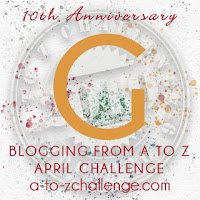 The 26 eclectic-genre short stories for my #AtoZChallenge are excerpts from travelogue notes by
fictional character Gahlen, who first appears in SHARDS OF MEMORY – Oral History in a Heartbeat.

“Ludwig I of Bavaria was the Crown Prince when he came up with the idea for the Walhalla plan,” Georg said without preamble, an auspicious trait in a guide although he had grown to be more of a friend to us. “The buildings he commissioned were by far his shining moments, especially the Walhalla museum. Ludwig wanted to recognize the wave of patriotism that was growing among the Germanic states in Eastern Europe. Napoleon had taken control, something that could not stand. Ludwig wanted to honor great people and events in his history.
“His plans would cover history all the way back to the Battle of the Teutoburg Forest in the year 9 A.D. He wanted to commemorate scientists along with clerics and writers, women especially. Not to minimize his honorable intentions, but maybe his guilt was in play, also.”
Obviously, Georg enjoyed referencing the king’s extramarital affairs, likely focusing heavily on the scandal with Lola that lost him the throne.
“Construction took some time to commence. Artists had completed busts of sixty famous people before construction began. He was coronated King Ludwig before he actually commissioned the temple. The location he chose for construction was overlooking the Danube. As a model for the building, he had in mind the Parthenon in Athens. The architect used those exact dimensions, which seems more like copying than designing, but who am I to judge?
“The main criterion for people selected to have a place in the museum was that they speak German. Or, being ‘of the German tongue’ to be more specific. Ludwig had another requirement to receive the honor. His interest was not so much in bestowing upon people of achievement some sort of special honor; his interest was more in honoring great people in the fields of arts and sciences.
“One final eligibility requirement was that the person must be dead for at least twenty years.” Georg gave each of us a quick glance, an obvious twinkle in his eye. “Fair warning, just in case you were thinking of nominating me for a position.”
Once again, this elderly gentleman had managed to elicit our spontaneously laughter.