Hauʻoli Makahiki Hou: Cruising on a Sea of Words series

Each year, it is tradition for me to ring in the New Year by compiling a list of goals to take me through the upcoming twelve months. My writing projects head the list, with reading goals close behind. Some goals appear year after year, not for lack of accomplishment but rather because they bear repeating on an annual basis.

Healthy lifestyle goals top this chart since my total hip replacement in 2018, diagnosis of pre-diabetes early in 2019, followed by surgeries and radiation treatments for DCIS in 2019-2020. Whether I reach or exceed a goal, my satisfaction is the same. Only when I totally miss the mark do I feel any measure of disappointment.

For 2021, I've set a reasonable bar that reflects what I plan to accomplish over the next year in terms of:

I fear neither success nor failure. My concern is about setting a goal to accomplish something that is a questionable measure of my success or failure, whether as a writer specifically or as a contributor to society in general.

How do you measure the success of your goals? 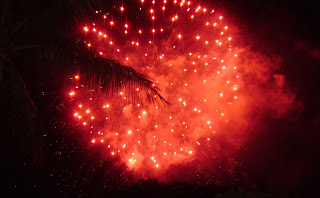 Happy New Year to You

Much Success in Your Future.

Cruising on a Sea of Words: Mele Kalikimaka

The "Sea of Words" series consists of Hawaiian words found in my latest Pepper Bibeau mystery novel, Island Cruise Homicide. For Christmas, though, I am posting a Hawaiian phrase that represents the spirit and aloha of the Islands: Mele Kalikimaka.

Mele means song or chant; also, merry. Kalikimaka is Hawaiian for Christmas. This is truly the locals' traditional way of sending holiday greetings to say Merry Christmas to you.

The greeting is familiar to many people because of a song by Bing Crosby, a crooner of the early 20th century. "It's the thing to say on a bright Hawaiian Christmas Day!"
The following includes excerpts from my Christmas posts of 2018 and 2009.

Cruising on a Sea of Words: kuleana

Words are cash in the bank for a writer. In my latest novel, Island Cruise Homicide, I use a selection of Hawaiian words, several Pidgin English words, and a few less easily categorized words, all specific to the scenes or dialogue in the story. The Glossary included at the end of the novel is for readers interested in a bit more description.

In a series of blog posts, "Cruising on a Sea of Words" reveals how the words fit into the story. Today's word, kuleana, is the Hawaiian word for responsibility or duty. When one has higher authority or special talents or knowledge, it is their kuleana to help others. But all residents are reminded that it is their kuleana to help in Hawai'i, whether to keep the islands clean and safe, to assist elders, or to respect another's privacy. We all share the responsibility of human kindness.

An excerpt from Island Cruise Homicide, a scene set at Ka'ena Point on O'ahu:

“I’ve been coming here to meditate every Wednesday for many years," Lehu said. "During my youth, Father taught me to replenish myself so I could concentrate more quality-filled attention on the needs of others.”

Nate rested on his haunches with his attention riveted on Lehu. “Do you teach others how to surf?”

“Yes, teaching is my kuleana, one of my responsibilities. Because I was gifted with the ability to understand the sea, my duty is to assist those who are not as attuned to the ways of the ocean.” 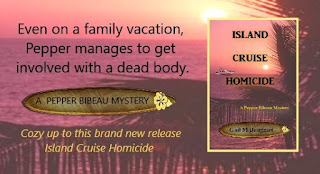 Homicide in the Nth Degree

Research has always been a favorite part of my writing experience. This was especially true for my newest Pepper Bibeau mystery, Island Cruise Homicide. (No, the research did not include the act of homicide on any level.) But while working as a police reservist and part time peace officer in Minnesota some years ago, I did learn interesting facts about the degrees of homicide.
Whether the cause of death is murder, or manslaughter – which is murder without the pre-meditation part – the legal definition is Homicide.
The act of manslaughter is further divided into two categories and four degrees. The term homicide also covers actions described as excusable homicide, in cases of self-defense; and justifiable homicide, as in acts of war.
The maximum penalty for the homicidal act of premeditated murder is “an eye for an eye.” Legally, the death penalty has been carried out by use of various methods, including the guillotine, electric chair, rope, and lethal injection. Debate over the morality and effectiveness of beheading, electrocution, hanging, and administration of fast-acting drugs or chemicals will probably continue until the last being capable of ratiocination* remains in power.
The category, level, or distinction of a homicide is often determined by a multitude of factors not directly related to the definition of the word. A familiar adage is: “Sticks and stones can break my bones, but names will never hurt me.”
Here’s the sixty-four dollar question: If you bludgeon to death someone – who you know has a very bad temper but insults you anyway – is it considered an act of self-defense, manslaughter, or premeditated murder?
*ratiocinate: form judgments by a process of logic; reason. 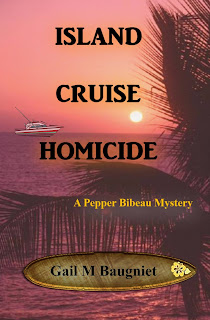 A relaxing family cruise around the Hawaiian Islands is not what is in store for Pepper. Along with the fun of hiking, biking, snorkeling, and many other energetic activities, she contends with the mysterious disappearance of a wizened old surfer, a case of stolen surfboards, an end to a career - and a corpse.
Available now on Amazon in eBook and Paperback. https://amzn.to/2JuYg20
*****
Posted by Gail M Baugniet - Author at 12:42 PM No comments:


Today is the first full day of "Stay at Home" on O'ahu. This means staying off the beaches and out of parks and restaurants. The order for all non-essential workers is meant to slow the spread of the coronavirus so healthcare personnel can keep pace with the rise in medical needs.

My first reaction was to subscribe to the late night talk show home editions to keep up my spirits. Last evening Stephen Colbert demonstrated how to change a flat bicycle tire. A relatively unremarkable event until he stated that what he learned at age 13, how to change a flat tire, was of use today. He then asked his virtual audience, "What did you learn at age 13 that is useful to you today?"

The question required a bit of thought and could easily lead a person down multiple rabbit holes while thinking back to such a young age. Where it led me was to my eighth grade cheerleading squad. As a student in a newly constructed school with a class of about 21 girls and boys, the teacher insisted that the squad must allow every girl in the class to participate as a cheerleader for sports events. This meant all or nothing. The lesson I learned then, that is useful today, is that everyone counts equally.

Here in Hawaii, that means 'Ohana, where everyone counts and no one is left behind . . . except when it comes to Spam during a hurricane watch - then you're on your own!