Heroines With Heart is a massive blog tour that runs throughout 2013, that features books with strong female protagonists. Several different genres are represented. My focus is on the Mystery/Thriller/Suspense genre. "Heroines With Heart" will also give away fun digital prizes and sharing new and noteworthy books throughout the year. Want updates?
Today, please welcome author Chris Stralyn for my first "Heroines With Heart" interview. Chris Stralyn never intended to be a writer. Short-order cook, security guard, safety officer, childcare provider, and teacher were all titles she'd worn - but never writer. Then she entered an essay contest for "The Worst Vacation Ever" and won.

Writing became her new hobby, and soon she had several articles in print with local publications. This was followed by a short story, The Khaki Pants, which was published by RDR Publishing in an anthology that went on to sell over a million copies.

A suspense thriller was her next undertaking, and in 2008 This Time You Lose was named a finalist in the TNBW Strongest Start Novel Competition. Four months later it earned the distinction of being a TNBW Readers Choice Top Ten Novel, and has remained on the Top Ten list ever since.

Chris Stralyn continues to put pen to paper in her endeavor to appease the Muse within. She lives in Michigan with her husband and family.

~ Rather than the 140 characters we’ve grown accustomed to on Twitter, can you share with us a more detailed account of the novel and your research for This Time You Lose?


This Time You Lose is the terrifying story of one woman’s struggle to survive when she and the children she cares for become victims of a home invasion gone terribly wrong.
Lisa Kaamp operates a small childcare business out of her home in Nogeksum, Michigan. Highly respected and known for going the extra mile for her daycare kids, she thinks she's handled every daycare emergency possible. But nothing prepares her for the horror she now faces.

Lisa finds herself bound and gagged, four strange men in her home, and the daycare children held hostage in the next room. Terrorized by her captors as the authorities work to meet the ransom deadline, she tries negotiating with the men for the release of the children, but soon realizes they have no intention of letting anyone go.

With the deadline approaching, Lisa must do the unimaginable to protect the children and get everyone out alive.


~ Is “the job” the most important part of your protagonist’s life?
Yes, but not in the ‘normal crime novel’ way. Lisa’s job is that of Childcare Provider. She’s not a cop, not an ex CIA operative. She doesn’t have any secret karate/ninja training. She’s just an everyday person, with an everyday job that she loves. The fact that she loves the children she cares for makes her a very formidable, if unlikely, heroine when faced with a group of thugs that break into her home.


~ The Mystery/Suspense genre is the focus of Fast Five interviews, but what unique twist makes your novel stand out?
This Time You Lose is the ONLY novel out there that features a Childcare Provider as heroine. It is a fictional story that is set in reality. With everyday normal characters, reacting as everyday normal people do, it is frighteningly accurate and scary as readers realize that this could really happen. (I’ve actually received emails from readers who believed this story to be true, asking how the characters are now!)


~ How does your main character’s profession draw her into suspenseful situations, (murder, for instance?)
The main character in This Time You Lose is Lisa Kaamp. While her profession as a Childcare Provider offers her a few suspenseful moments, they are nothing compared to the suspense that occurs when she and her childcare kids become hostages during a home invasion.


~ Is this book part of a series, and are you working on a sequel?
I am currently working on a sequel to This Time You Lose, and hope to have it available late next spring. I can’t give too many details without spoiling the ending of This Time You Lose for readers, but I can say that many, but not all, of the characters will be returning in the sequel. If you like the intensity of the first book, you will love the second one.


~ This isn’t a Fast Five question, more an “if/then” scenario: If Paris is not an option, then where would you most like to spend your time writing and why.
I live in Michigan - the land of cold and snow. If I could choose anywhere to relocate as a writer, it would be somewhere warm and tropical. Anywhere warm and tropical!  I’d love to be able to walk on the beach in the morning, sit under a palm tree to write in the afternoon, and relax in the pool at the end of the day. Ahhhh…. that would be the life! J

***In 2008 This Time You Lose was named a finalist in the TNBW Strongest Start Novel Competition. Four months later it earned the distinction of being a TNBW Readers Choice Top Ten Novel, and has remained on the Top Ten list ever since.***


~Author Bio/Avatar (Due to my “day job” I do not use personal photos on the internet.)


FAST FIVE: Linda, rather than the 140 characters we’ve grown accustomed to on Twitter, can you share with us a more detailed account of the novel and your research for INZARED, Queen of the Elephant Riders?


LINDA LEANDER: INZARED, Queen of the Elephant Riders is a book about a girl who becomes a strong woman. Growing up dirt poor, hating her name, and misunderstood by her family, Bertha Maude Anderson longs to travel and find excitement.  A Gypsy circus comes to town and by a strange twist of fate, the girl meets the boss handler, Paytre and his elephant Cecil.  It’s instant attraction for the girl and the elephant.  Persuaded to join the troupe, she leaves in the dark of night without telling anyone.  She’s given the stage name of Inzared and her new life begins as she learns to ride the elephant and becomes the main attraction in the circus.


Some of the Gypsies aren’t so accepting of the Gajji in their midst.  There is trouble brewing and the old fortune-teller Vadoma warns Inzared that her life will not be easy.  She and Paytre fall in love and seek to solve a mystery that has plagued the circus for years.  Inzared learns healing and fortune-telling from Vadoma.  She works hard to be accepted into the clan even while she worries that her family will never want to see her again.  She wonders if the dreams she has had all these years were worth it after all?  Should she go home?  Will Vadoma’s predictions come true?

I researched for two years to make this story accurate.  From correspondence with European circus museum curators to interviews with elephant trainers, I learned much about the circus in 1843.  I got in touch with Roma Gypsies to learn about the customs and dress of the day.  The research was fascinating and I thoroughly enjoyed it.


LINDA LEANDER: While the “job” of riding the elephant and becoming a famous circus performer is an important part of Inzared’s life, it’s not the most important part.  That is her inner strength and willingness to live with other people and their beliefs.  She is constantly subjected to differences she has never witnessed.  She is eager to be accepted and is hurt by the indifference she receives from some of the Gypsies.  Hard work is part of her upbringing and she uses that to gain a foothold in the Gypsy community of circus performers.


FAST FIVE: The Mystery/Suspense genre is the focus of Fast Five interviews, but what unique twist makes your novel stand out?


LINDA LEANDER: I think it’s the year (1843) and the twist of the circus being a group of Gypsies.  They were just becoming accepted in America, although distrust and hatred was rampant among the Gajji (non-Gypsies).  Their colorful pasts, clothing and traveling from place to place made them unique.


FAST FIVE: How does your main character’s profession draw her into suspenseful situations, (murder, for instance?)


LINDA LEANDER: Inzared is a girl of sixteen when the story opens.  Inquisitive by nature, she notices things going on around her and asks questions.  Even though her mind tells her to beware she can’t help researching what has happened in the past and comparing it to the events that are taking place now.

FAST FIVE: Is this book part of a series, and are you working on a sequel?


LINDA LEANDER: Yes, the book is part of a series.  INZARED, Queen of the Elephant Riders is book one of the series.  The second, INZARED, The Fortune Teller, will be published in the spring of 2013.  It continues Inzared’s story as a healer and fortune-teller and of going home to attempt to make peace with her family.


FAST FIVE: This last one isn’t a Fast Five question, more an “if/then” scenario: If Paris is not an option, then where would you most like to spend your time writing and why.


LINDA LEANDER: Easy.  Mexico.  And the great thing is – I already live here.  Mazatlan is a city on the Pacific, it’s full of life and it’s where I love to write.  The ambiance of the city is old-world European.  The beaches are beautiful and the sunsets to die for.  I have a whole studio to myself where I do my best creating.  I couldn’t ask for a better place to write!


Links to where readers can follow Author L. Leander:


Book Title:  INZARED, Queen of the Elephant Riders by L.Leander


Video Trailer for INZARED, Queen of the Elephant Riders:  http://youtu.be/lQHtsFQGAP0

One of the most rewarding areas of writing a novel, after the editing and formatting have culminated in the actual publishing process, is hearing from someone who "loved the book." Whether the comment -read that compliment - is heard in conversation, read in an email, or discovered in a review, it not only makes me feel good, it validates the hours of writing and research that went into the story’s creation.


The reviews I have received are like little treasures in my pocket, or maybe even jewels in my pointy cardboard crown. Having a reader mention that descriptions “are detailed and colorful,” or that the novel is “filled with intriguing characters,” ramps up my energy and sends me straight to the word processor for an extended writing session on my latest Work-in-Progress.


Another event I find rewarding is a book giveaway attached to an author interview. Recently, I had the wonderful opportunity of appearing on Laurie’s Non-paranormal Thoughts and Reviews:


She arranged a giveaway for copies of my novel, DEADLY AS NATURE, in print and digital format. Laurie announced the winners today and I quickly arranged to have the digital copies sent out. That makes me want to head straight for the word processor again.


Thank you to everyone who visited Laurie’s blog site during the weeks I was featured. To the winners, I extend a heartfelt Congratulations and Aloha; to Laurie, Mahalo Nui Loa.


The first draft of the third novel in my Pepper Bibeau Mystery Series is complete, thanks to the incentive of NaNoWriMo and an additional drive at the beginning of December. Now that the holidays are concluded, and Valentine’s Day is a hazy dot on the horizon, it is time to revisit the manuscript. It’s not all fun and games, but with the excitement of contests and book reviews, it does often seem that way! 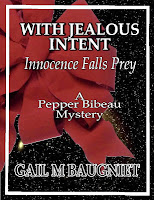 Working cover and title
of third Pepper Bibeau mystery
for NaNoWriMo
Posted by Gail M Baugniet - Author at 11:09 AM 3 comments: