﻿﻿﻿﻿MELE KALIKIMAKA is one of my favorite Christmas songs. Remember Bing Crosby's 1950 rendition, accompanied by the Andrew Sisters? "That's the island greeting that we send to you  . . ."

***This is a timely article that I wrote and posted on December 14, 2010. Upholding tradition, I attended "Nutcracker" at the Blaisdell again this year. Chi Cao, principal dancer of Birmingham Royal Ballet and star of Mao's Last Dancer joined the cast of more than 200 dancers for the production.*** The holiday season on the island of O'ahu opens with the Honolulu City Lights celebration. The Electric Light Parade travels through downtown to Honolulu Hale (City Hall) for the annual tree-lighting ceremony. This year's tree is a striking 55-foot Norfolk pine. Another tradition is "Nutcracker" performed on-stage at Blaisdell Concert Hall.


At the National Memorial Cemetery of the Pacific at Punchbowl, rows of evergreen wreaths on grave sites honor fallen veterans this holiday season. The wreaths adorn 1,288 of the graves, part of the Wreaths Across America campaign.
Aunties like myself, keiki, and tutus all enjoy the entertainment of Hawaii's local groups this time of year - Na Leo Pilimehana, Makaha Sons, Kapena, and the Brothers Cazimero, to name a few; special hula dance groups (halaus) including Hoku Zuttermeister; and celebrities Amy Hanaiali'i Gilliom, Keali'i Reichel, and Willie K (the title of his Christmas song "Aloha Kalikimaka" reveals what the K stands for.) Music by the late Israel (Iz) Kamakawiwo'ole is always heard around the islands. ﻿﻿﻿﻿
﻿﻿﻿﻿﻿﻿﻿﻿﻿﻿﻿﻿﻿﻿﻿﻿﻿﻿﻿﻿﻿﻿﻿
﻿﻿﻿﻿﻿At Ala Moana Center, our open-air shopping mall, children ride the Candy Cane Train and watch musical productions on Center Stage, the illusion of snow delighting the young at heart. Hula performers draped in colorful regalia entertain with beautifully choreographed, swaying movements.

But it isn't officially the "season to be jolly" until the Santa Claus statue is assembled up on the center's rootftop for all to see!
﻿﻿ ﻿﻿﻿

In Honolulu, jolly ol' St. Nicholas arrives in an outrigger canoe, landing on the shores of Waikiki!
http://www.facebook.com/video/video.php?v=1298656108005
And we do have real snow here. Recently, my cousin reminded me of the snow-covered mountain of Mauna Kea on the Big Island. Low temperatures on Maui's Haleakala also attract the white fluffy stuff that folks in the northern states take for granted this time of year.
http://gbjorn.wordpress.com/2008/02/02/pictures-of-snow-on-haleakala-maui/
﻿
﻿ ﻿
Kalikimaka is Hawaiian for Christmas.
Mele means song or chant; also, merry.
This is truly the locals' traditional way,
Of sending holiday greetings,
To say Merry Christmas. To you.

PEACE IN YOUR LIFETIME 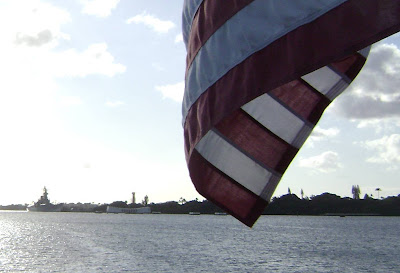 My first thoughts upon waking this morning were of war and peace, not Tolstoy's epic novel or the end of the Iraqi war, but of a war so many of us wage daily as we strive for peace of mind.

In 1998, I waited with many others who stood along the southern beaches of O’ahu, facing east Waikiki where an extinct volcano jutted into the Pacific Ocean. Slowly, the battleship Missouri drifted around the land mass of Diamond Head, on the last lap of its journey from California to its new permanent home near Pearl Harbor's Arizona Memorial. The ship represented the second bookend of World War II. The peace treaty that ended the war was signed by members of the Japanese and American military on the deck of the Missouri. 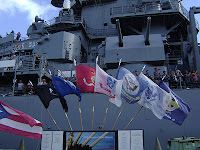 I planned to tour the Mighty Mo along with family visiting from the mainland in 2007, only to learn the ship was in dry dock for renovations. My chance finally arrived on December 7, 2011, the 70th anniversary of the attack on Pearl Harbor; a fitting day to see the USS Missouri and the USS Bowfin.
\ 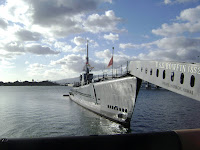 Are wars inevitable, or is it just an inevitability that we accept wars? Either way, we can still obtain peace in our personal lives. By setting aside quiet time to reflect on the good the world has to offer, we can raise the bar from the low end, up...up...up, until a feeling of peace follows. Which bar? Why, the one that measures our mental state as it drifts between love and hate, happy and sad, courage and fear, or energy and inactivity.

Several weeks ago, an entertaining movie left me giddy with pleasure. Within minutes of exiting the theater, however, I encountered a situation that soured my mood. The rapid decrease of euphoria was disturbing until I realized my state of happiness is self-determined. It was my decision to slip from happy to sad.

Others may place obstacles in your path, but the final say in how you feel is yours. Will you love or hate, be happy or sad, become agitated or remain calm? Wars of the world may be beyond our control. But, ultimately, we maintain our own peace of mind.

Where will you set the bar to have peace in your lifetime? 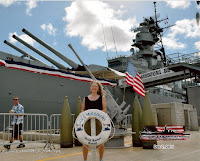