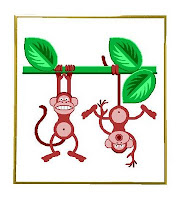 To me, developing scenarios and moving them forward, backward, or sideways is more fun than watching monkeys swing upside down in a tree.

The second novel of my Pepper Bibeau mystery series is well underway with all the plot lines established. Now that I understand each of the characters’ roles, and how they've decided to act, I am ready to add the full weight of their reactions. That's the fun part.

After reading and rereading Donald Maass’ The Fire In Fiction, I know the most important task of writing is to create conflict for or within my characters. Conflict creates tension, mystery, and drama. It carries the threat of failure, something to which I can relate. Most people can.

Why does the threat of failure create such stress?
1. The father of seven doesn’t get the promotion that would include a much needed raise - will the family have enough to eat?
2. A young girl who doesn’t know how to swim falls into the deep end of the community pool - will she make it to the pool’s edge?
3. A strong wind causes a harsh drop in temperature - will the hikers survive?
Anyone can easily bring a scenario to its logical conclusion, but a good writer will continue to raise the stakes and tension, until that conclusion is reached.

A missed promotion or lost raise means less money for food. Unhealthy meals may lead to weakened brain power causing:
... lower grade scores for the child struggling to concentrate;
... slower reaction time in the mother cooking at a hot stove or carrying a squirming baby;
... reduced quality of critical-thinking for the father in his job as a stock broker or vehicle assembly lineman or construction crane operator.
Knowing that the result of one or more of these consequences can be deadly creates tension.

***If the young girl who falls into the pool can’t swim, and the gathering of people is loud, her distress might go unnoticed until it is too late.
***Or when her friend jumps in to save her, the girl panics and they both drown.
***Another possibility is that someone knows the girl can't swim and pushes her in, then covers her shouts for help by turning up a boom box to top volume, which leads to a CSI-type mystery.

A group of people climbing one of Alaska’s snow-covered mountains is unprepared for the drastic drop in temperature.
### Unable to reach shelter, and without proper clothing, two members curl up in the snow and freeze to death.
### Maybe the group brought tents, but one person wanders away from camp in a disoriented state and dies of exposure.
### Or worse, there isn’t enough room in the sheltered area, and the person who draws the short straw is exposed to a subzero wind chill factor. Drama ensues.

Whatever your choice of genre, what intrigues you most about a novel and keeps you reading: tension, mystery, or drama?

Choosing Between Coffee and Chocolate 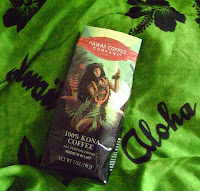 Is it fair to ask you to choose between two simple and relatives inexpensive caffeine pleasures, coffee and chocolate? I didn’t think so.

While reading the morning newspaper on Kindle, I enjoy two cups of freshly brewed coffee, usually 10% Kona but this week 100% Molokai dark roast. For me, beginning the day slowly is sort of a pleasant, guilt-free ritual. For years, I awoke to a clanging alarm clock, rushed through breakfast and morning tasks, then traveled to my place of work, whether across town, miles down the highway, or merely a few short blocks' walk. It was the choice I made when I was sixteen years old and continued to make for decades. Now that I can stay home and compile stories at my own pace, another choice freely made, I appreciate the more relaxed lifestyle. 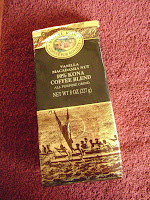 Recently, I attended an informal talk given at the Duty-Free Shop in Waikiki by an author and coffee aficionado. Shawn Steiman earned his doctorate in Tropical Plant and Soil Sciences at the University of Hawai‘i. One of his comments, something to the effect that coffee opens the mind and clarifies thinking, stuck with me. Could this reasoning apply to my writing? It was an idea worth some thought.

It isn’t necessary for me to have a clear idea of what I want to express when I first transform my thoughts into written words, I reasoned. But once the thoughts are on paper, I need to convert those ideas into a comprehensible format for others to easily understand. The mystery within a novel should not remain a mystery after the reader finishes the story. If I understood Shawn correctly, a cup of coffee, once consumed, should open my mind and give me the ability to clarify important details.

Yes, I know, the writing process still requires that I bring all the tools with me to the coffee table.

Shawn’s book, The Hawai‘i Coffee Book - A Gourmet’s Guide from Kona to
Kaua‘i also peaked my interest in coffee production and the diverse varieties 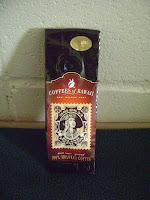 of coffees grown here in the islands. Some are even described as having a “chocolate character” so there really is no need to choose between coffee and chocolate. You can have your chocolate, and drink it too.

Knowing your brain needs stimulation to function properly, and assuming you have eaten all your vegetables, could you make a choice between that cuppa joe and a chunk of Belgian chocolate?

Click on the link below to check out Shawn Steiman's book:
The Hawai’i Coffee Book
Posted by Gail M Baugniet - Author at 10:01 PM 7 comments: 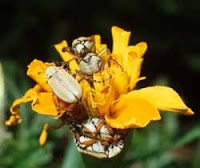 Have you ever researched a topic and found yourself immersed in memories?

As a child, I was not afraid of bugs. We lived in what was considered the country as our house was located four miles north of the small town's main street.

In our yard, we had boysenberry shrubs filled with pebble-sized berries. My two older brothers told me I couldn't eat the juicy red and purple-colored fruit because they were "poison berries." I believed them, of course.

Blushing Bride hydrangea hedges bordered the south and east edges of the yard. Beyond the hedge on the east were open farm fields, to the south a cemetery. In the crook of the right-angle hydrangea hedges were a few scattered rose bushes, the kind with large country blossoms. The bugs crawling around all this greenery were called rose chafers.

These little bugs, smaller than your baby fingernail, found their way into my current Work-In-Progress novel. While researching the rose chafer, not for any bug-like traits or description, but for the correct spelling, I relived some of those childhood days when concerns about poison berries and rose chafers measured the depth of my worries.

Thanks to the Internet and dusty back rooms of libraries or Register of Deeds offices, I love the research process. Whether for a novel or a genealogy project, it is a pleasure to ignite that spark.

What sparks old memories for you?

For more information on chafers and hedges click on:
rose chafers
Blushing Bride Hydrangea
Posted by Gail M Baugniet - Author at 5:16 AM 11 comments: