K is for KEOGH CLAN OF IRELAND #AtoZChallenge


K is for KEOGH
What's in an Irish Name?
My relatives from Tipperary, Ireland have the name McKeough. In researching the purpose of beginning a name with the prefix Mac, Mc, or O, I learned the following:
In ancient Ireland the population was much smaller than today and the mass movement of people was uncommon. It was usual therefore for a person to be known only by one name. This single name system began to break down during the eleventh century as the population was growing and there was a need for a further means of identification. The solution was to adopt a prefix such as Mac (Mc is an abbreviation) or Ó.
Mac means 'son of' whilst Ó means 'grandson of'.
My relatives moved from Ireland to Lower Canada in the 1840s. No records of movement for free emigrants to Canada were required until 1865. (The USA required these records since 1773.)
Engaging in genealogical research and writing stories based on the information garnered during the research process are my idea of finding The Fun in Writing. It isn't climbing Mount Everest or kite boarding in Kailua on O'ahu (no, that's not me on the water!) but the "high" is still there. 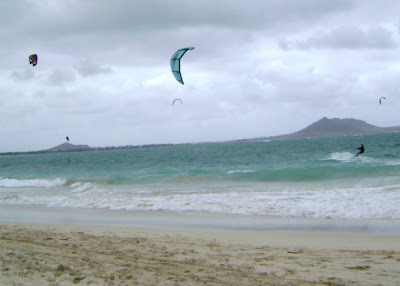