During a break in the April A to Z Challenge, I am posting these three poems to keep up to date with my goal of posting all 70 poems by October 22, 2016. Rather than search for past poems in the book, you can just click on the link above marked "ANOTHER NEW BEGINNING essays" for the full list and a link to each blog post. 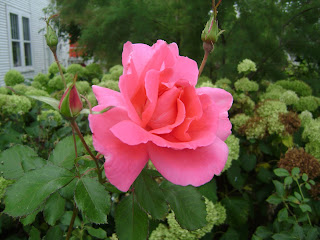 ﻿
#33
Going Out
Remember staying home alone,
while the parents went out?
Watching Gunsmoke on television
and drinking chocolate malted milk.


On and on until
we stayed out all night
and the parents
stayed home alone.
Where they no longer drank beer or
smoked cigarettes
but watched Johnny Carson on television
and ate Jiffy popcorn.


Life goes on as Cowboys
justify their horsepower.
And Letterman signs off.


It’s so easy to start singing The Statler Brothers’ song, “...smoking cigarettes and watching Captain Kangaroo...” Of course, the song is about one man’s lonely life while the above poem relates to teens sneaking a smoke while the folks are out with friends. Everyone longs for something.


Remember watching “cowboy” shows like Wagon Train, The Rifleman, Wanted Dead or Alive, and Have Gun–Will Travel? Or “comedies” like The Adventures of Ozzie and Harriet, The Donna Reed Show, The Jack Benny Show, and Leave It to Beaver. Back then, they were allowed to advertise cigarettes during commercial breaks; adults even smoked in televised shows.


National television ran advertisements that glamorized smoking. The wording guaranteed it was healthy: “More doctors smoke Camels than any other cigarette.” and “27,679 physicians say ‘Luckies’ are less irritating.”


As we aged, television didn’t change all that much. Late night programs differed in name only, first Jack Parr and Johnny Carson; then David Letterman and Jay Leno. “Cowboy” shows followed a pattern also. From Paladin’s Have Gun-Will Travel to Raylan Given’s Justified, it was non-stop shooting and killing in the name of justice around the country.


Life might have seemed easier when we were watching free television and popping Jiffy-Pop popcorn over the stove. Maybe it wasn’t easier, only different . . . but the same.


*****     *****
#34
Letterman Style
Today’s Top Ten reasons
why people born in 1945
can be happy about
living past 70:
10. Whatever hasn’t killed you yet, you can probably keep doing.
9. People continue to offer you their seat, everywhere.
8. You can look forward to sequels of Jurassic World.
7. Jägermeister will still be sold in those little 50ml bottles that fit in the coin slot of your walker wallet (see #10).
6. Your Facebook friend count will keep growing.
5. You replaced Windows 8.1 with Windows 10 and know you’ve still got decades to figure it out.
4. You experienced Bruce Willis/Demi Moore and Jackie/Kelso reunions (with no one getting “Punked”.)
3. Chances are good you will join in the pageantry of Queen Elizabeth II’s retirement, thanks to William and Kate (and George and Charlotte).
2. You can witness what comes after Blu Ray.
1. You may learn what it’s like to have a woman take over the White House --- as POTUS. (and celebrate or not: your choice.)
This is one of those lists that will be fun to update as time goes on. How many Facebook friends did you have before your last birthday, and how many have you gained since then? Which of the people listed in #4 are married, to each other, again? Is Windows still counting or did it stop at 10 point something or other? And how many sequels can Jurassic Park stand before Jeff Goldblum’s chaos theory destroys the world?
Even as I was writing this particular “poem” the gossip magazines were reporting an upset in the royal matrimonial suite. The slings and arrows of debates and caucases and rallies and primaries had barely begun.

So often she wanted to believe
It was over. Wish the pain
Would evaporate with the
Next summer’s breeze.
She prayed for control
Over ever-threatening
Salty tears
While the years played out.
Drifting in her mind
Like autumn leaves,
The school report cards and
Newspaper articles still beckoned.
“Time to do something
With his things,” she says.
But more a question
Then a decision to act.
“Why now?” they ask, all the while celebrating her strength to live.
A loved one dies, and those left behind try to pick up the pieces and move on. Each hour is comprised of placing one foot in front of the other to keep advancing forward without knowing if the result is worth the effort. One day, the pain subsides for many moments longer than any preceding span of time. Finally, only precious souvenirs of school days and confirmation photographs serve as reminders of happier times.
As the years wear on, yellowed newspapers and curling tablet paper begin to fade along with the memory. Is it time to let go, put to rest that which can no longer be? The decision has been delayed for such a long time. For what purpose, to prolong the pain?
No.
Rejoice as you clutch the tangible reminders that represent a significant portion of your heart and soul. Do not let go until you decide that you are ready. There is no weakness in holding onto memories, only strength worth celebrating.
*****     *****