D is for DEADLY SINS #AtoZChallenge

D is for Deadly Sins


When authors entertain me from cover to cover, this solidifies my belief that the art of writing is fun. Every writer knows to balance reading with writing. How easy that goal is to meet with books that are fun to read - from cover to cover; books like Six And A Half Deadly Sins.
Six And A Half Deadly Sins by author Colin Cotterill is a Dr. Siri Paiboun mystery set in Laos. When I learned that Mr. Cotterill was invited to be a guest speaker at the 2017 Left Coast Crime Conference in Honolulu (another event where you can have fun being a writer), I looked for his books at the main library on King Street. How lucky of me to have found this book, one of my “fun-est” reads of the year.

Dr. Siri Paiboun’s witticisms make him a loveable character who never becomes overbearing or boring. The novel's humor is subtle, woven into the fabric of the story. It creeps up on you with a quick punch while the action continues to move forward, leaving you to catch up.
Retired coroner Siri and his wife are the quintessential happily-married couple; their love undying. When the doctor receives a mysterious package containing a handwoven skirt, known as a “pha sin” with a human finger sewn into the hem, it sends them on a scavenger hunt of clues around the countryside of Northern Laos. 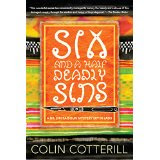 Adventure within the pages, the historical narrative, clever clues, and dangers encountered along the way make this a unique mystery. Another Dr. Siri Paiboun Mystery will be available on August 2, 2016, I Shot the Buddha. With a fun title like that, how can I resist?
Posted by Gail M Baugniet - Author at 9:00 PM