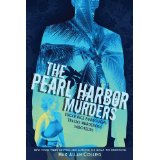 The Pearl Harbor Murders by Max Allan Collins is a novel set in the last few days preceding the Pearl Harbor attack on O‘ahu. Much of the story’s action takes place in Waikiki. The fictionalized protagonists are the world-famous (real life) Edgar Rice Burroughs of Tarzan fame and his son, Hully, who share narrative and investigative roles within this murder mystery.


One of the central figures is a popular singer at a local night club. Her name, Pearl Harada, couldn’t be more apt for this tale leading up to a day that “lives in infamy.”
Woven throughout the story are details of first and second generation (issei and nisei) Japanese immigrants and citizens living in Hawaii, and how their lives were affected by incidents leading up to December 7, 1941. Some of the characters are either composites or pure fiction. Others, along with Edgar Rice Burroughs, are based on persons who played prominently in the making of history.
The author is noted for his historical fiction novels such as Saving Private Ryan, In the Line of Fire, and Air Force One; and his syndicated comic strip, Dick Tracy from 1977 through 1993. His research for this novel fills the narrative with titillating information about O‘ahu in 1941, focusing on A‘ala Market in Chinatown; Fort DeRussy; Aloha Tower; and Kewalo Basin. Also of note are the Halekulani Hotel (the location of the famous ‘House Without a Key’ Restaurant named for the eponymous Charlie Chan novel) and the War Memorial Natatorium.
The story may have fascinated me more as a guided tour of the area, but I thoroughly enjoyed the mystery within the tour, and was pleasantly surprised with the solution.


Next up for review is:
Speaking In Bones by Kathy Reichs