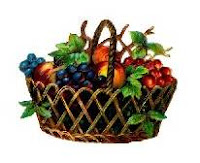 Can you pick a favorite title?

CHERRIES JUBILEE "thumbnail thoughts" for 22 "cherry-picked" e-books, Part 2, features all Kindle e-books; many are by independent/self-published authors. My eclectic choices range from romantic comedy to mystery, thriller to memoir, no erotica. I admit that book titles influenced my selections.

Each entry consists of a book title; author name; an opening line or heading; and ~ in 22 words or less ~ an incentive for choosing the book. After sorting through over 300 e-books with the word cherry or cherries in the title, I eagerly added 22 titles to my e-reader TBR list. I hope you enjoy reading my CHERRIES JUBILEE “thumbnail thoughts” as much as I enjoyed gathering them.

13. CHERRIES ON TOP by Rowan McAllister. Opening line: “Would you like another, sir?”
After ending a relationship with an abusive girlfriend, Craig finds a no-strings-attached date with Doug may become more than a one-night stand.

14. IF LIFE IS A BOWL OF CHERRIES, WHAT AM I DOING IN THE PITS? by Erma Bombeck. Okay, this isn't a new author, but on a list of books with "cherries" in the title, this just had to appear!

15. PITTED CHERRIES by Sophia White. About Zilla: “Kiss my ass was her motto and she welcomed any and everyone to do so.”
A story of three children in rural Hilton Head left vulnerable as their mother, Zilla, struggles to move on with her life.

16. UNDER THE CHERRY BLOSSOM TREE: An Old Japanese Tale by Allen Say. There were eggs in every bird’s nest, the air buzzed with honeybees, and cherry trees blossomed all at once.
He swallowed a cherry pit and soon a cherry tree grew out of his head ~ a witty retelling of a classic tale.

18. CHERRY SOURS by Sean Micheal. A great opening line: “He was more gay by intent than practice.”
I am obviously old-fashioned or showing my age ~ never would have guessed that “Cherry Sours” referred to Gummi Bears!

19. BOWL OF CHERRIES: A Novel by Millard Kaufman. The brilliance of a ninety-year old debut novelist; co-creator of Mr. Magoo and twice-nominated for Academy Awards for screenwriting.
Assama, Paradise, a biblical Garden of Eden. Once a wasteland of roaming lions and panthers. Before Saddam.

20. SWEET CHERRY RAY by Marcia Lynn McClure. “You just keep blendin’ in all easy and such-for now-for yer old pa’s sake.”
One of Cherry Ray’s true delights was her dime novels, Oklahoma Jenny and Arizona Bill being her favorite.

21. CHERRIES COBLER - A Novel by JoHannah Reardon. Cherry is pushing 30 and has a bit of a weight problem. After ten years, her plan to find The One is growing a little thin.

22. CHERRIES - A Vietnam War Novel by John Podlaski. Chapter One, line 2: It was 1970, and just outside the compound, hundreds of hippies and former soldiers picketed and protested against the war.
Drafted and trained for five months ~dubbed “Cherries”~ nothing prepared them for the nightmare of the dense Vietnamese jungles.

Which title sounds the most interesting to you?
Posted by Gail M Baugniet - Author at 2:15 AM