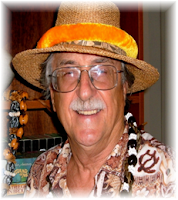 In the Sisters in Crime/Hawaii spotlight today is my guest, Gene Parola. He is a retired Professor of cultural history at Indiana University and University of Michigan-Flint; the Ministry of Defense Saudi Arabia and Koc University in Istanbul, Turkey. Gene lives in Hawaii and is a member of our writers’ group in Honolulu. He is the author of several books, including Lehua, his newest novel which he will discuss today.

GAIL: Thank you for joining us today, Gene, for a FAST FIVE author interview. Your novel, Lehua, is a fascinating story set in Hawaii. Can you please share with us the background story and the responsibility your protagonist Lehua assumes in her life?
GENE PAROLA: The Lehua of the title is a young ali’i wahine coming of age just when her Queen destroys the thousand year old Hawaiian religion. This happens six months before the arrival of the first Calvinist missionaries, but is in response to powerful ali’i who have already converted to Christianity.
As in many ancient cultures, its history, mores, and social systems are bound up with its religious values and practices.
The ali’i, knowing that they must stay on the ‘right’ side of the emerging new monarchy, conform quite readily. The kahuna class, the most threatened in the new order, immediately find shelter in the retinue of powerful chiefs who have already converted or intend to.

In Lehua’s case, she is conflicted because she sees some of the advantages of the changes to result from this cultural shift.  At the same time, she is intelligent enough--and insightful enough, to recognize the agonizing negative effects on the behavior of the ignorant common people.
Lehua takes as her kuleana (responsibility) the guiding of the maka’ainana (commoners) down the narrow path between pono (righteousness) and the preachers. That is, maintaining the values of the old system while incorporating the new. It will be a tough job, as we see in book two, because the ‘long necks’ are bent on destroying every aspect of the ‘old’ savagery.
Because Lehua is ali’i, it is her unspoken, unquestioned duty to lead her people. It is especially important now, when large numbers of ali’i are abandoning that responsibility as their own sacred reason-to-be is questioned.
GAIL: The Mystery/Suspense genre is the focus of Fast Five interviews, but what unique twist makes your novel stand out?
GENE PAROLA: In a coming of age novel, as in a Mystery/Suspense novel, the compelling question is what will happen to the character, and can and how will she survive. Lehua’s task is a fictious one, but set against the historic failure of the ali’i to successfully resist the onslaught of both Christianity and external commercial forces that would result--80 years later--in the take over of Hawai’i by the U.S.
Historically there were a few attempts to confront the twelve shiploads of missionaries that arrived in successive waves. The first, and most well known, was Chief Kekuaokalani’s failed military attempt a short time after the ‘lifting of the kapu’ in 1819. All the rest were subrosa and were finally submerged in the duality of day-time Christianity and night time nativism. These latter efforts were finally defeated by the death of a generation and the unrelenting, pressure of the invaders. Except in the smallest and remotest enclaves.
In book two we see Lehua lay the ground work for one of those clandestine  movements as she builds confidence among the chiefs and kahuna on Molokai. All the while, raising children on an early ranch, assimilating her paniolo husband’s half-Chinese culture, and conflicted as she is drawn inexonerably back into the questionable practices of the old religion that she thought she had turned her back on.
GAIL: How does your main character’s profession draw her into suspenseful situations?
GENE PAROLA: In Lehua’s case it is the constant confrontations with other members of her ohana (particularly her brother, whom she loves dearly), who are often as conflicted as she, but who yield gradually to her much larger world picture and the teaching of many religions, which she is introduced to by her Chinese in-laws.
GAIL: Is this book part of a series, and are you working on a sequel?
GENE PAROLA: Yes. This is the first of a trilogy that will follow Lehua as she confronts all of the outside influences that impact Hawai’i until she dies at the age of 80 as a kokua on the Hansons Disease Settlement on Molokai.
GAIL: You have whet our appetites for the novel, Lehua, and given us good reason to read the full story. This next isn’t a Fast Five question, more an “if/then” scenario: If Paris is not an option, then where would you most like to spend your time writing and why?
GENE PAROLA: I seem to be able to work anywhere where the spirit moves me. Recently on vacation I sketched out a new mystery and wrote the first chapter in longhand while my wife and grand daughter transposed sheet music into guitar chords.
However, there is one place I’d like to try out. It’s in China near one of the tourist entrances to the Great Wall. A sidewalk sign with an arrow up hill announces accommodations at the End of the Universe inn.
Where readers can follow GENE PAROLA:
www.geneparola.com
www.kindle.com (search by author name) http://www.amazon.com/Lehua-Kaao-Wahine-Lehua--story-ebook/dp/B008A86292/ref=sr_1_1?s=digital-text&ie=UTF8&qid=1347607825&sr=1-1&keywords=Lehua
www.CreateSpace.com
Posted by Gail M Baugniet - Author at 9:00 PM