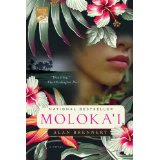 Moloka‘i by Alan Brennert was published in 2003. This is not a story about Father Damien, the Belgian priest who spent his life caring for the Hawaiian people diagnosed with Hansen’s disease. This disease was also known as leprosy, and the victims of the disease were confined to the peninsula of Kalaupapa on the Hawaiian Island of Moloka‘i. Father Damien arrived in Hawai‘i in 1864. He was diagnosed with Hansen’s disease in 1894 and became bedridden a little over four years later.


Mr. Brennert’s novel, Moloka‘i, his vision of daily life in that setting following the time of Father Damien, is exceptionally well-researched, and excellently written.
A mule ride on the Island of Moloka‘i takes you on a trail that leads down the face of the Pali cliff to the peninsula of Kalaupapa. The closest I’ve come to Kalaupapa is the “top-side” of the island. A certain spot top-side overlooks the area where so many of those afflicted with the disease lived out their years. The top-side portion of the island rises high above the homes of residents at Kalaupapa and stretches east toward Maui.
The life of Rachel, the main character in Mr. Brennert's novel Moloka‘i, is woven throughout this fact-based tale. The novel begins with a stark illustration of how Hawaiians were “condemned” for being diagnosed with what was known, for many years, as leprosy.


This story pulls no punches, relating how the people, many of them young children, were forced to leave their homes and families to live in substandard conditions among strangers on an unfamiliar island. The narrative unfolds in turns with horror, humor, sadness, and triumph. Sickness, both physical and emotional, permeates the whole.


It was with satisfaction, however, that I read the closing chapters and endnotes of this inspiring novel.
*****
Posted by Gail M Baugniet - Author at 9:00 AM