PEPPER is back WITH FIERY VENGEANCE 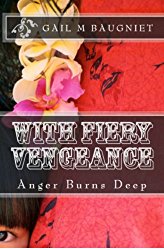 In the third novel of the series, Pepper Bibeau returns to Hawaii to visit her son on the Big Island and attend a wedding. The vacation is meant to be a time of healing for her son’s father, and relaxation for the family. Instead, unfolding events reveal Pepper’s inner strengths, and a guilty weakness.


Insurance Investigator Pepper Bibeau returns to Hawaii in December, 1972, where a vengeful stalker shadows her from Island to Island. While in Hawi on the Big Island, to visit her fourteen-year-old son and attend her cousin's wedding, Pepper discovers a body on the blood-soaked back seat of an abandoned classic Woody. A poorly executed plan of a local police detective fails to trap a suspect, who then flees to Oˋahu.


When a Wisconsin woman is injured in an accident on Oˋahu, and the husband threatens to sue his insurance company, Pepper's assignment is to get his signature on a medical insurance release form. After the suspect in Hawi flees to the labyrinth of Honolulu's Chinatown, Pepper follows. Her plan is simple: settle the medical insurance claim, and flush out the suspect.


Personal strife, unexplained deaths, and ghostly events are interwoven with the burning anger of a father who has lost all reason. With the sanity of a killer in question, Pepper must fight to save her family, and herself.


WITH FIERY VENGEANCE Anger Burns Deep is a soft-boiled Mystery wrapped in a Traditional Cozy, an enjoyable read for those quick breaks between all the holiday activities.
Available today, along with all of the Pepper Bibeau Mystery series, at Amazon: http://amzn.to/1iNbwKU
Posted by Gail M Baugniet - Author at 11:00 PM