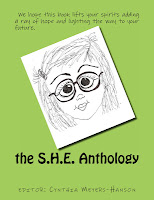 A SPECIAL NOTE to the reader (from the editor of S.H.E. Cynthia Meyers-Hanson):


Each blog about the S.H.E. Anthology has a unique excerpt to keep things fresh.
When I heard about the massacre at Sandy Hook Elementary School, due to my experiences with many deaths in our small community within a short period of time, I felt that the kids and folks might feel less alienated and alone if they were shown the light at the end of their tunnels. I wanted to find a way to be empower the children and their community while revealing to them a HOPE that things can and do get better. I thought that town might enjoy rhetoric from those kindred spirits.  PLUS, I felt others including health care professionals might enjoy those types of stories.
After pondering a bit, God illuminated my next step. Thinking of three books that I had partial copyrights to, I began compiling that book. Plus, I immediately had the title of an anthology in my mind. By the way, the S.H.E. Anthology is NOT a romance anthology but it was written by all females. In this book, the girls recollected traumas, mostly related to death, that they faced while in elementary school. Their stories reveal their path out of mourning along with many minor miracles that they encountered. Their tales of hope and inspiration are true accounts from those children turned authors. One writer and illustrator is only six; Thai wanted to be a part of empowering children to survive harsh things in life; so, her piece is story number three in this compilation.


This book is meant to empower Newton as well as others that read it. We hope that this anthology, also, sheds some new light on grief recovery in the minds of teachers, mental health professionals, and adults handling major life changes. The compilation’s royalties will help charities involved in grief counseling or with mental health issues- especially for children therapies for the types of traumas witnessing massacres produce. For example, one local group ‘New Hope for Kids’ (Orlando) will get some of the profits from this compilation because the group that started this organization helped Stacey over 20 years ago; her story is in the anthology as well as excerpts in my blog @


In the book, The Evans Terrace Girls give their account of what happened when 7 or more parents died within a year or 2 of each other in a small subdivision of about 110 homes. People started saying their land was CURSED. The children heard those rumors about their subdivision and were scared to death. Then, when a neighbor lost her dad to a blood clot after surgery, the kids felt the need to help. When one of the girls heard the rumor that the mourning family ran out of milk, she setup a traditional solution or proverbial lemonade stand. That day, other angels or young children arrived; many of those neighbor kids ran door to door selling half glasses of hot lemonade. They raised enough quarters to buy milk and other perishables. More importantly, they formed a group that became a club and led their neighborhood out of grief. An excerpt from their story follows.


In this excerpt after years as a club serving their community, the girl’s dreams are fulfilled; it’s karma!
“The other half of our funds are available to get stuff for the orphans, now,” I informed my friends (young girls AKA informal club members) while we munched our lunch.


“Are we going to make baskets, again?” Ann questioned.


“We can get plenty at the dollar store,” Nicole eagerly added.


“Why don’t we save some of the money and let them buy what they need?” Joy participated in the discussion.


“My mother loves to shop.  We could let her buy the basket stuff, “Lee perked up with the thought of shopping.


“It would be good to save some of the money for a cash donation,” Kate decided aloud.


“I bet they get plenty of candy.  Maybe, they need paper for school," Tina agreed.


“No one can get too much candy,” Nicole interrupted as I nodded in agreement.


“What do you think?” Jane questioned our chaperone as my mother placed a dessert on the table.


“Think about what?” My mom looked at her bewildered.


“About how to help the children’s home,” I brought her up to speed on the current agenda.


“Oh, the lady I called said that funds are the most helpful because they can buy what the kids need.”


“But, the kids need candy.  That lady won’t buy them candy if we give up the money,” Nicole observed.


“Then, buy a few bags of candy, and put the rest in a money order,” Joy attempted an end to this discussion.


Smirking at her, “We can shop.  Let’s just save some of the cash for a money donation,” My mother refused to be intimidated which was not really what Lee was attempting anyway.


“I’ll call again on Monday.  I’ll set up a donation date.  It would be nice to be greeted formally this time.  Let me see what we can do,” Our leader finished the discussion for now.


My grandmother always said that three was a charm.  I am sure she stole that line from someone famous, but it didn’t matter.  Early in our third year together, we were charmed or should I say some of the good we did came back to us.  Some call it charisma or karma.  In any case, we received a great reward.


Early on Monday, my mother called the Methodist run children’s home.  “Hello, I am representing a group of children that raised money for your organization.  They want to come in person to make this donation,” My mother spoke to their finance lady.  “Since none of these girls are Methodist or over the age of fifteen, this donation is special.  Plus, they had to sell plenty of Tupperware to earn their funds for you.  So, could someone thank them in person?” My mother spoke with nearly one breath so as not to allow the lady time to second think her or reject this idea.


“That is hard.  We close the business end for the weekend.  Let me think.” After a short pause, she made a very shocking observation. “It seems we are coming upon our yearly benefactor celebration in two weeks.  We invite all our big contributor to tour the place.  There is a picnic celebration of lunch and the dorms are open for inspection.  We run trams for about four hours.  Can your girls come on that Saturday?”


There was a stunned silence. Then, my mother uttered, “Ride the trams?”  She was overjoyed.  Years ago, we came with our basket and missed the tram.  We wanted so badly to be invited but never imagined we’d get a chance to hop onboard.


“Yes, and have a free lunch on us,” The lady detailed the day.


“Our donation would not even support you feeding us,” My mother volunteered.


“The lunches are donated.  How many girls can I put on the guest list?”


When my mother announced her news at our next meeting, we could not contain the enthusiasm.


“The tram!” Joy remembered aloud our desire to ride it the other time.


This news was mostly exciting for the oldest members of this club.  We imagined this day but none of us believed the news.


“Really, the train thingy?” Ann questioned as if she was still in disbelief.


“Can my mother chaperone?” Nicole knew her mother would be proud to tag along on this adventure.  She tended to be in on our orphan excursions.


“Sure,” My mom answered.  “I told the lady there would be nine girls and two drivers.”


Nicole ran to our telephone before anyone could suggest other than her mother.


The day arrived.  This time our mother had film and took pictures of us enjoying our activities at this home.  During this adventure, we were entertained by the orphan and parentless chorus.  Plus, there were more cookies, ice cream and candy stands than any carnival I ever attended.  We couldn’t eat it all in just four hours.  Evidently, these kids didn’t need our three bags of candy.  Good thing that we donated the rest of the sixty dollars in cash.


Unfortunately, the trams were not scheduled to run until after a lengthy religious and choral presentation.  After a two-hour program finished, Kate decided that she’d run late for her softball game.  Therefore, Kate and Tina called their parents to pick them up.  They left before lunch.  They never hopped on board the trams, but it wasn’t their dream anyway.


After the presentations and food including picnic lunch, we toured the facility.  Sadly, we discovered that not all the children were orphaned.  Some were abandoned.  Others were taken from parent’s that had violence or drug problems.  Others were the problem; their parents could not tolerate their bad behavior.  So, they sent them to this facility.


As we mingled with the other benefactors, many of these adults were enamored with our club.  Wearing our shirts afforded us momentary fame.  However, I had to leave because I found the reality of this place too sad.  I couldn’t imagine the children’s life, and I didn’t want the picture in my mind.  It bothered me, so my mother, Joy and I left after riding the tram to only two of the dorm houses.  Meanwhile, the rest of the club stayed eating the ice cream while enjoying their status and acclaim.


A dream?  A nightmare?  Actually, overall it was cool to be invited.   Prayers are answered.  So, be careful!

What other minor miracles happened when these angels joined forces with others to make wishes come true?  Read The Evans Terrace Girls or their section in the S.H.E. Anthology.


The eBook copy of the S.H.E Anthology is available @
The paperback version comes in BLACK & WHITE on AMAZON @


Plus, the S.H.E Anthology is in color paperback format @


in other eBook formats @ SMASHWORDS.com @


So, come on buy to be inspired and help grieving children.


My main author page is @ WEEBLY and you can follow my blog, there.