MURDER IN MESOPOTAMIA by Agatha Christie

To say I cut my teeth on Agatha Christie novels may be an exaggeration, although my wisdom teeth didn’t sprout until late. Whether I read Murder in Mesopotamia during my teething years remains a mystery. But when the novel was chosen for a local book club reading, I eagerly jumped in head first. Who doesn’t like meeting up with an old friend, especially someone as masterful a detective as M. Hercule Poirot?

One thing that pleasingly caught my attention early was Ms. Christie’s apt use of metaphor to describe an elusive feeling:


“Nobody seemed quite natural. There was a queer atmosphere of tension.
I can explain best what I mean by saying that
they all passed the butter to each other too politely.”


With the above statement, Agatha Christie allows her character to simply and vividly depict the atmosphere of the situation. I immediately felt the discomfort around the dinner table. 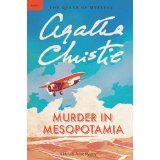 As for solving the mystery within the story, it took me some time to eliminate most of the suspects. And while I did have a fairly good bead on the culprit, I couldn’t have told you why other than through the logic of writing a mystery plot. Of course, using “mystery writer’s logic” as a method of deduction can make reading less enjoyable. I tend to avoid this tactic in favor of having the author reveal to me “whodunit.”


Agatha Christie’s straightforward writing style and the personality traits of her detectives make reading her novels a relaxing form of entertainment.


Next up for review:
First Four Virgil Flowers novels
by John Sandford
Posted by Gail M Baugniet - Author at 6:00 AM