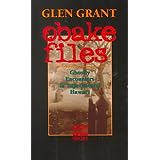 I recently joined Goodreads, a site I would describe as Facebook for book lovers. You can add a list of books that you've read, are currently reading, or plan to read. You can also add reviews or read what others have written. Goodreads is also a great place to organize your reading list.
I have approximately 50 books stacked in corners, waiting to be read. Was that good enough for me? Noooo! I purchased a Kindle and added 20 more books to my TBR list. 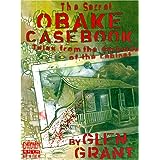 After compiling my list on Goodreads, I added several reviews, more as a writing exercise than anything. One of the first books I listed is entitled Obake Files, Ghostly Encounters in Supernatural Hawai'i, written by the late Glen Grant of Hawaii. Many years ago, I had the pleasure of meeting Dr. Grant at a library gathering when he spoke about his newly released book, The Secret Obake Casebook. Unfortunately, I never had the opportunity to join one of his ghost tours, though I did take a tour led by one of his followers.

My Review of Obake Files

The stories in this book are not meant for a Halloween night by the campfire for children. These stories actually reflect 25 years of study conducted by Dr. Grant, who held a doctorate in American Studies from the University of Hawai'i and was a teacher at Hawai'i Tokai International College.

No urban legends here about taking pork over the Pali or disasters following removal of lava from the islands (true stories, but exaggerated over time.) Even if you don't believe in the supernatural, you'll be hardpressed to disprove the encounters detailed in this book. Better to sit back and enjoy the stories of ancestral bones in mysterious caves, a Kapahulu haunting, legends of the fire goddess Pele, and the curse of Aloha Stadium.


http://www.goodreads.com/
Posted by Gail M Baugniet - Author at 9:01 AM 5 comments: Links to this post

﻿
﻿One of the first mystery series I ever read was by author Erle Stanley Gardner. His characters later became famous when the successful television show, Perry Mason, aired from 1957 to 1966.

Perry Mason’s right hand man was a woman, Della Street. Viewers watched for signs of a romantic involvement that never evolved, but as long as he kept pulling a rabbit out of the hat in court with the help of his investigator, Paul Drake, people were entertained.
﻿
﻿ Mr. Gardner, writing as A.A. Fair, created another successful mystery series that didn’t appear as a television show. The protagonist of this series, Bertha Cool, was not built in the image of television’s attractive Della Street. In fact, she started as a 200 lb., plus-size woman who opened a detective agency in the 1930’s following her husband’s death. Her sidekick was a disbarred lawyer, Donald Lam.


In the 21st Century, I can see an updated version of them in a movie starring Queen Latifah as Bertha, and Don Cheadle as her sidekick.

The reason I mention Bertha Cool today is because of a discovery I made several weeks ago. Bertha possessed a weakness similar to that of my protagonist, Pepper Bibeau, an unrelenting love of pies. Bertha carried her indulgence to a “plus-size figure” extreme while Pepper limits hers to special occasions, thereby maintaining a modicum of control over her dress-size.

For the sake of authenticity, I selflessly immersed myself in the personal eating habits of Bertha Cool and Pepper Bibeau. During my research regarding the palatable appeal of pies, I relived the days of my childhood when most meals concluded with dessert. My favorite was always Mom’s still-warm, homemade apple pie covered with a scoop of slightly melted vanilla ice cream.

In my eagerness to thoroughly cover the field of pies, I probably taste-tested two dessert flavors never available to Bertha Cool, haupia and lilikoi. I'm sure she would have approved of both.
﻿
﻿
﻿﻿
﻿﻿

What is your favorite literary character’s primary indulgence?
Posted by Gail M Baugniet - Author at 9:01 AM 3 comments: Links to this post